I’ve been laughing to myself a lot lately about how my life is turning in circles. Yesterday I was taken to visit an ADPP Horticultural School just outside of Nametil where the government guest house is located. As soon as I arrived I was transported back in time; the well organized school buildings, the cleanliness, students in uniform, the pleasant receptionist, the explanation of how the school and vegetable sales work were all so classic ADPP.

I could have gone there without knowing what it was and easily guessed this is an ADPP place. The school has only existed for two years and already has 122 students with plans to expand to 180 next year. The have a total of 473 hectares with only a few hectares currently under vegetable cultivation. At some point in the future they plan to use much of the acreage for a cashew plantation. I was surprised to find that an ADPP project had a lack of irrigation, but I’m sure this won’t last for long. After our tour I began to ask our guide a few more questions and I let him know that I worked for ADPP in Matola Rio in 1990. This led to questions about “do you know…” and sure enough I may have located a great friend and colleague from those days. He apparently is only two to three hours from Nampula and running an ADPP Banana Plantation. A message has been sent to him. I’m hoping we can meet before the end of my trip.

On Wednesday after several delays we finally made it outside town today to begin our farmer visits. After a bumpy forty-two kilometer drive we arrived in Iuluti and began searching for the local agricultural agent. After some discussion we discovered that one of the agricultural associations that we wanted to visit was 23 kilometers further along the road. A long discussion ensued and then it was determined we did not have enough gas to get there. Instead we went to visit with a man who was farming alone and lived in the center of Iuluti.

His fields were small, but very nearly weed free and he grew a variety of crop close to a small river which still had water in it. His cabbage was absolutely beautiful and free of holes.

I had to ask “do you use any chemicals on your crops?” A bottled was pulled out of its hiding place in the corn.

I began to recall just why my life took the path it did. In 1990 many times I observed pesticides being used and I would ask “what are you doing” because I was interested in learning about agriculture.  From these discussions I learned that quite often people did not know proper application procedures and often could not even read the directions. This was either because the directions were in English or the person applying the pesticide was illiterate in Portuguese. This experience led me directly to interning on an organic vegetable farm upon returning to the United States. I sometimes joke that we were farms slaves but I did learn a lot and was able to use that knowledge to begin my own organic vegetable farm. Twenty years later here I am standing looking at and taking a photos of the pesticide instructions that in some ways led me here in the first place. Although the farmer follows the instructions quite well the pesticide he is using is supposed to be used for cotton, not edible produce.

The next farmer we visited was the president of an Agricultural Association called, Okalihery de Mucue, or Helping Each Other. This farmer’s passion reminded me why I strive so hard to do what I do. Anastacio had only been growing vegetables for two years and moved around the country a bit previously living in Beira and Quelimane. When he moved to this area he contacted the local agricultural extension agent for advice and has been working closely with him ever since. He spoke rapidly and was full of enthusiasm when describing his operation and his plans for the future. Before we could even introduce ourselves he began to show us his wonderful and simple irrigation system. 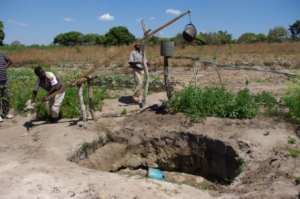 He wants to learn about crop rotation in a mixed vegetable system and about insect and disease identification. I wish I could go back and thank Anastacio for his enthusiasm as he restored some of my enthusiasm. I hope another Farmer to Farmer Volunteer is able to thank him for me. 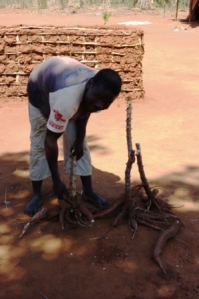