In Nametil it took me two weeks to be better able to meet my daily living needs. I finally secured a table, a chair and mosquito net although I was never able to get the net hung properly so in the end it was useless. It did however provide a nice bit of color for the empty room. After a few days I was able to get hot water for instant coffee every morning. I would have boiled the water myself except the kitchen cooking heat came from a small coal fire in a grill. At night the coal and grill are locked away so I have to wait for Virgilio, the cook of another government worker who lives in a different government house which is not equipped with a kitchen, to arrive and boil some water for me. Yes I should have prepared as if I were camping. At some point early in the first week I learned that the driver for my host organization is staying in the same government guest house I am. The place is much larger than it appears from the outside and many people, actually all men, are staying here. The driver, Erasmo, began talking about how he was going to prepare Shrimp and Coconut for dinner. I of course said I love that and as a result was invited me to eat it with him. In return I supplied the beer for the meal. As he was unable to find any coconut we ended up eating a Shrimp and Eggplant Stew with rice which was absolutely delicious and restored me to myself. This best meal yet included good conversation in my crazy Portuguese, which now includes occasional Brazilian pronunciation and a Spanish word here and there.

As the days passed Eramso and I formalized our arrangement. I supplied the money for the food, after consulting with me about my likes and dislikes he decided what we would eat and gave instructions to Virgilio about what to buy and any necessary prep work. Finally Erasmo would finish the cooking when we returned from the field. Due to a severe lack of variety in the local food market I ate shrimp at least three times, grilled fish once or twice and either a cabbage salad or green pepper salad with every meal. The seafood was brought to our door frozen every morning likely from a shop like the one pictured here. 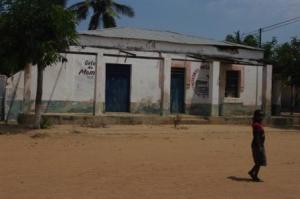 Once Virgilio and Erasmo prepared Matapa made with cabbage rather than pumpkin leaves. I prefer the pumpkin leaf version. My second favorite meal of the week was another shrimp stew in a light tomato sauce heavy on the garlic and onions served with fried manioc. We often bought vegetables from the farmers we visited and if we were lucky were given vegetables as a thank you.

Even here the selection was limited and my diet was primarily cabbage, green peppers, tomatoes and carrots. My one contribution to cooking was to make Cowboy Coffee for Virgilio, Erasmo and myself on afternoons when we were hanging around with nothing to do.

On the weekends I was left to my own devices as the grill was locked away and Erasmo returned to Nampula city for the weekends. My choice was to eat in the one restaurant in town where I usually had an omelet with French Fries. I’ve eaten more potatoes and eggs in the past two weeks than I usually do in two months back home! Now that I am back in Nampula City my food choices have expanded somewhat to delicious vegetable soups and expensive grilled meats and seafood, but mainly I am thrilled to be eating fresh pineapple and papaya every morning for breakfast. I can honestly say that I have never eaten a pineapple anywhere in the world better than the ones I have consumed in Mozambique. And this alone makes me happy.