Driving through a Baobab Forest

On the road between Huambo and Luanda November 6, 2010

Somewhere between Huambo and Luanda we drove through a baobab forest. I am certain it was after Dondo and the modern busy rest stop.

Perhaps it was during the sixth hour of the drive. I was mesmerized. Many were scared by termites, all were old. Some had fallen and were being burned for charcoal. All were giants. Once again I forgot to take photos as I was busy just looking.

The scene by this time had changed from the mountains and valleys closer to Huambo.

More people were moving along the road. More cars were heading to Luanda. Sometime we could see the train tracks, or Caminhos de Ferro de Luanda (CFL), built in 1885 that run towards the Democratic Republic of Congo. Only a couple of freight trains a week make the journey between Lunada and Dondo, but the Angolan government is planning to open a weekly passenger service between Luanda and Malange, a town beyond Dondo, in 2011. Dondo was a bit of a shock as everything appeared covered in black soot. The drive through Dondo to reach the other side of town and the Chinese built highway completed in 2005 was slow and I had time to wonder if the soot was from the train, just the dirt of rough living or if there was actually a coal mine somewhere nearby. As far as I know no coal is mined in Dondo much less anywhere in Angola and I have been unable to find out if another type of mine exists in the town. Perhaps the black soot was simply from charcoal production and use. On the other side of town, the highway with its four unmarked lanes, construction barriers, and roadside markets were a clear signal we were heading towards madness in Luanda.

Until this point I had been having a lovely day watching the scenery change, sharing the Portuguese bakery items I had purchased with my fellow travelers, joking, and taking photos from the bouncing front passenger seat of the CNFA truck.

I imagined what Fazenda Marcos must look like, which important MPLA members got to stay in the beautiful guest house located in the mountains before Quibala, and if there were any undeveloped hot springs near Alta Hama as the roadside development that looked soon to open was not so appealing- at least not yet. I wondered out loud if the Ekelelo Association farmers could be brought to the agricultural valleys to visit some of the large scale vegetable farms in the valleys to see what a well-organized rotation and succession plan looked like. I thought about the black soil on Ekelelo Associations land and the red soil just across the way.

I thought about how lucky they were and how I hoped they would be able to protect that soil and keep it fertile as that was by far their greatest assert and gave them a comparative advantage to others growers in the region.

As we crossed the Kwanza River I spotted a beach and longed to stop and swim. 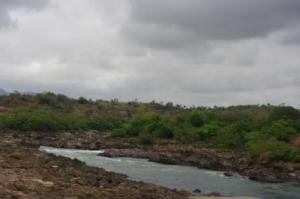 I wondered what the young men in Quibala who sold us gas would do for money once the new rest stop opened up outside of town. All I knew for sure was that they would never again have a problem writing a receipt. The guy in charge was sharp and a refreshing change from those who will unwilling to take risks and too often said “I can’t”.

I cheered when we passed the Cuca truck as the Huambo-made beer had made many a meal more appetizing. How I wished the large mushrooms for sale along the road had been served in the restaurants in Huambo.  I did not like canned mushrooms before this trip and I still have nothing positive to say about them whatsoever.

After questioning several people about the healthy good-looking dogs I came to the conclusion that while the dogs may slim down by December they are generally well treated and well loved. They are working animals guarding houses and animals, and as I witnessed on the drive, used for hunting when two teenage boys suddenly appeared on an isolated stretch of the road with long sticks, a game sack and their dogs. 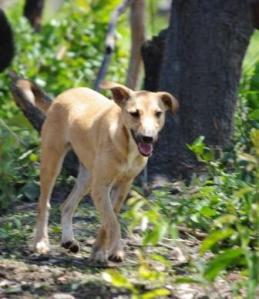 At some point during the drive I asked about landmines, but much to my surprise everyone seemed to think they were no longer much of a problem. I made a mental note, however, to follow the advice I was given years ago in Mozambique. If the car breaks down do not step off the road. If you need to pee do it next to the vehicle instead of walking around behind the abandoned house in the nearby field. Since returning home I found a photo on the internet taken in the past few years of landmines recovered along the road between Quibala and Dondo and found an ex-pat group offering training in what to do if caught in a land mine field. According to the Angola Mine Impact Survey from May 2007 eight percent of communities in Angola are still affected by mines and anywhere from 500,000 to 20 million mines were laid during the war. Land mines are quite clearly still a problem.

Before reaching Luanda we stopped in Catete, the birthplace of Agostinho Neto independent Angola’s first president, to stretch. A small town outside of Luanda, there wasn’t much to see except roadside trash and a small statue of Neto. It wasn’t much compared to Neto’s massive Soviet-style mausoleum in Luanda, but I was happy to get out of the car and move around, kick a can and jump and down. It gave me time to reflect on the days drive, and honor the green mountains, the black soil and full rivers, and to wonder just how much those baobab trees had witnessed in their lifetimes; elephants, village life, Portuguese colonialists, horses and the conscripts from West Africa and India brought to build the railroad, war, Cuban soldiers, landmines manufactured in every part of the world, peace, war again, Chinese road workers and now me speeding by in a white Ford pickup hoping to be able to buy Angolan National Team football jersey’s for her niece and nephew somewhere in Luanda. 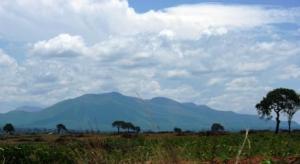